In November 2020, Typhoon Vamco and Super Typhoon Goni both slammed the Philippines, only 10 days apart. In the wake of these storms, people were not only left cleaning up damage and loss, but areas of the Philippines also experienced massive flooding.

But human life wasn’t alone in experiencing the devastation. Animals throughout the archipelago felt the wrath of these typhoons too. Including Alon, a cat who found rescue after typhoon hardship.

Caught up in mud and trash, Alon took Blessie Mae Ayalde and her dad by surprise when they found the kitten among storm debris along a riverside.

A Surprise in Need

Blessie and her dad were biking the neighborhood to check out the damage left behind from the storms and had come upon the riverside where trash had swept up onto the bank in a tangled heap. Among the mud and garbage, Blessie spied a kitten and thought she’d found a sad sight.

“She looked like she drowned in the flood and just got caught near the bamboo trees just like all the trash,” Blessie explained to The Dodo.

When the kitten blinked, Blessie couldn’t believe the little cat was alive! She quickly called out to the baby and was greeted with eager meows as the kitten came running towards a friendly voice.

“She started rubbing her body and head on me as if we’d known each other for years. That’s how I knew, ‘Ah, this cat wants me to help her.’”

On bicycle, Blessie had no way to transport the cat home. She hadn’t planned on this being a rescue mission. But she would quickly return to save Alon’s life.

Blessie came back to the riverside ready to help Alon, “hoping that she was still there.”

Alon was still there and though she wasn’t doing well, “she meowed and approached me as if she recognized me.” 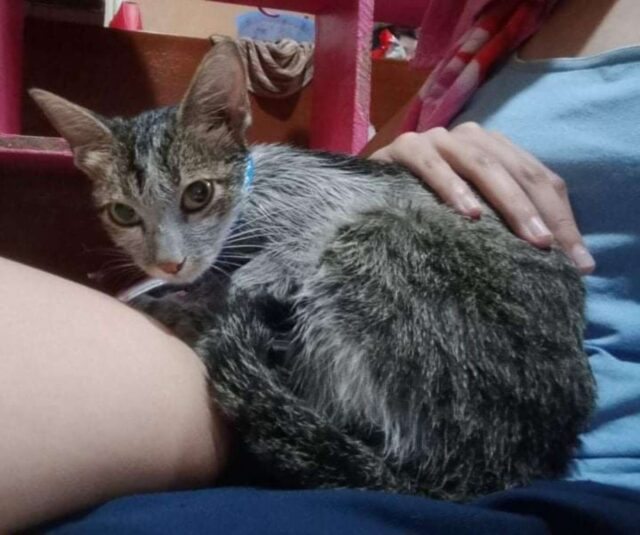 But Blessie knew Alon was going downhill and wouldn’t survive on her own. So, she brought the cat home and put her on the road to recovery with syringe feeding and medicine, along with a bath. But, Alon remained stained and Blessie realized her grey kitten was covered in motor oil.

A little switching of the soap and soon Alon’s grey stain sluiced off into the bathwater, revealing her to be a grey tabby kitten patched with snowy white fur! 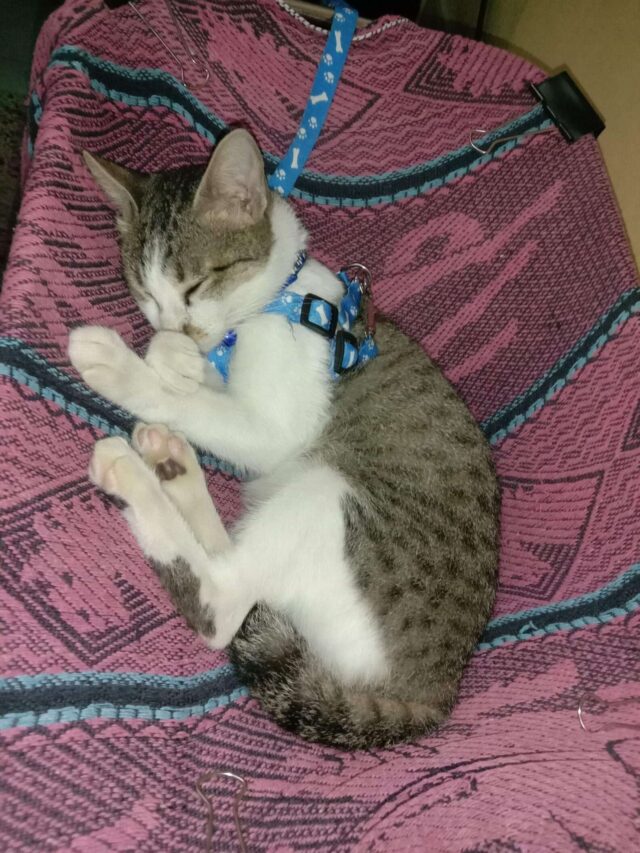 “I remember laughing a lot because I actually have another cat that looks exactly like her,” Bessie shared. “They have the same coat and pattern. My family often mistake them for each other because of how identical they look.”

Alon and her new identical sister love each other and have taken to sibling life well. According to Blessie, she’s even learned a trick or two from her role model on “how to get our attention, so now she always calls us in a loud way.”

“She is super talkative! Her meows are consecutive and she does not stop.” 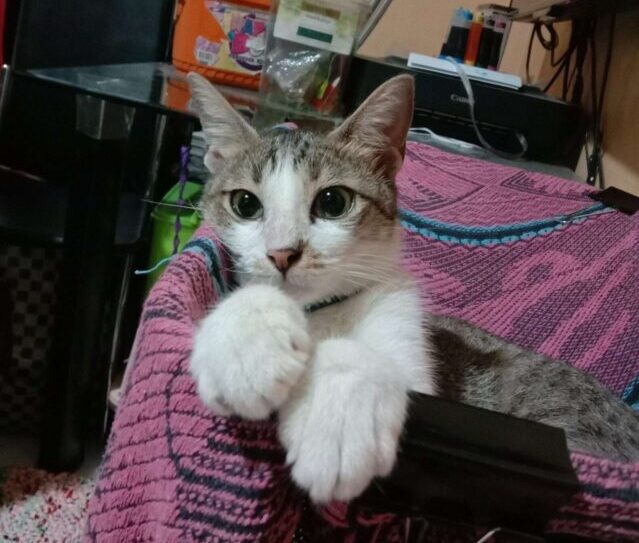 Now that Alon is healthy and happy after her riverside rescue, “she loves running around the house and jumping so much that I thought she was a kangaroo.”

And that’s how every cat and kitten should be! Happy, safe, and loved in a forever home!

Video Courtesy of The Dodo