Cat lovers are an inventive lot when it comes to figuring out the best way to accommodate their kitties.

And here’s a great example of problem solving for your felines from Taipei City, Taiwan.

A friend of Twitter user SCMcrocodile is a dedicated cat dad whose kitties presented him with a problem. He runs a small shop on the first floor of a building and lives on the floor above. His trio of cats enjoys coming to work with him, but they don’t always hang out in the store. They’ve figured out to squeeze themselves into the space above the shop’s ceiling. There, they would play and scramble about, leaving their dad to wonder what the three cats might be up to. Plus, he’d have to explain about the noise coming from above when the customers got curious.

But as a resourceful cat dad, he got an idea.

What if the ceiling was transparent and he could see what the cats were doing up there?

And would the cats enjoy being able to look down upon the store and their dad? Would they enjoying spying on the store from their safe play space?

Thinking the cats would certainly enjoy watching from above, he installed clear ceiling tiles.

The cats loved them, sitting on high, watching their dad all day long. Plus, cat dad and his customers are treated to one of the world’s cutest views, furry cat bellies smushed on a clear surface! 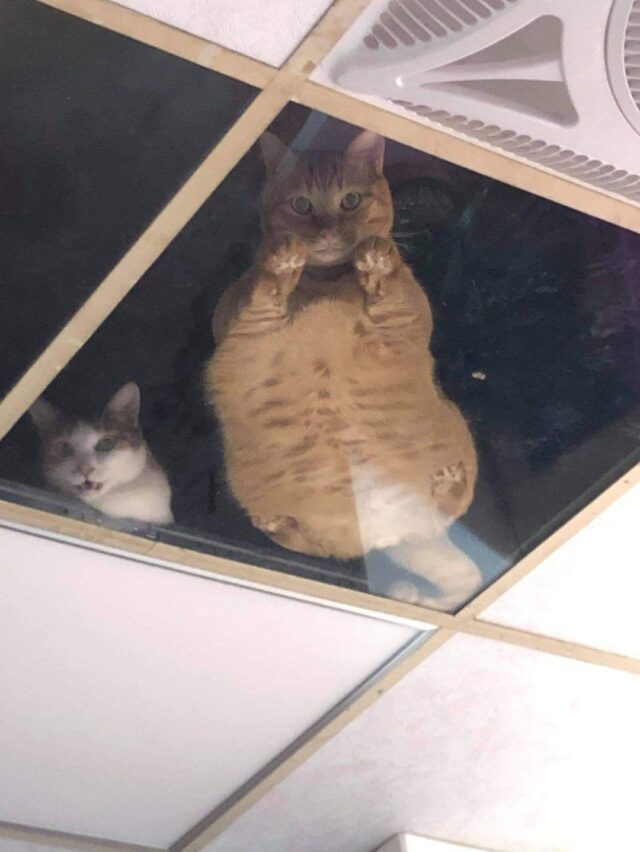 While their dad is a purrveyor of local goods, the cats specialize in keeping an eye on things. These felines prove you don’t need security cameras when you can have the ever-watchful eyes of a cat scanning the shop!

Captivated by the cats, SCMcrocodile captured pictures of the kitties sitting above and posted them to Twitter. Now, we’re in love with watching them watching us. 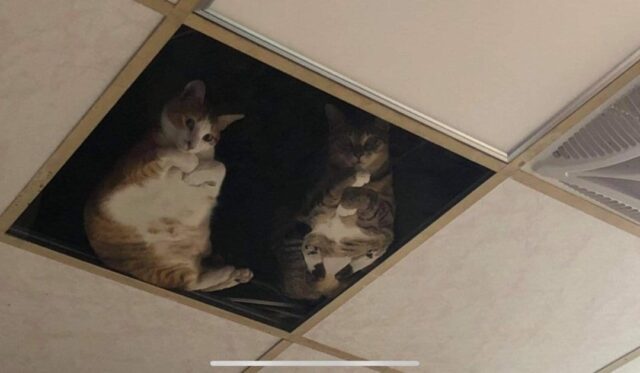 And while the cats are too cute lurking above, we already get the idea they’re pretty naughty. They did sneak in between floor and ceiling after all. So, when their dad’s friend also shared a photo of what happens when the three cats think dinner is late, it was no surprise to see their fit of destruction. 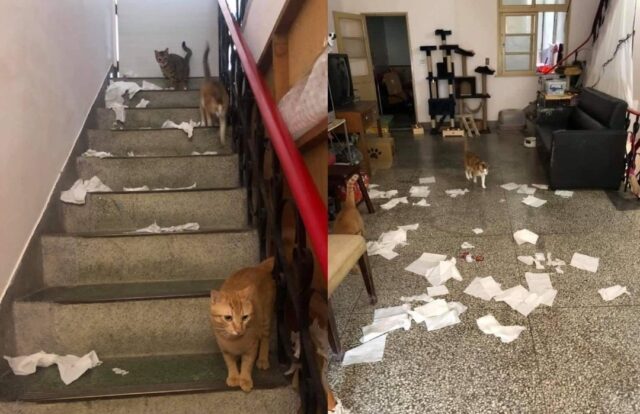 Judging by the big bellies pressed on those ceiling tiles, don’t believe them if they say they’re missing any meals!

These adorable kitties are spoiled and we love it!